A belting day for a day out on the bike

“Pain killers, I need pain killers…. Arghhh my back I’m seizing up quick pain killers…oh wait they’re in my back pocket…. Get me back on my bike I need to go” 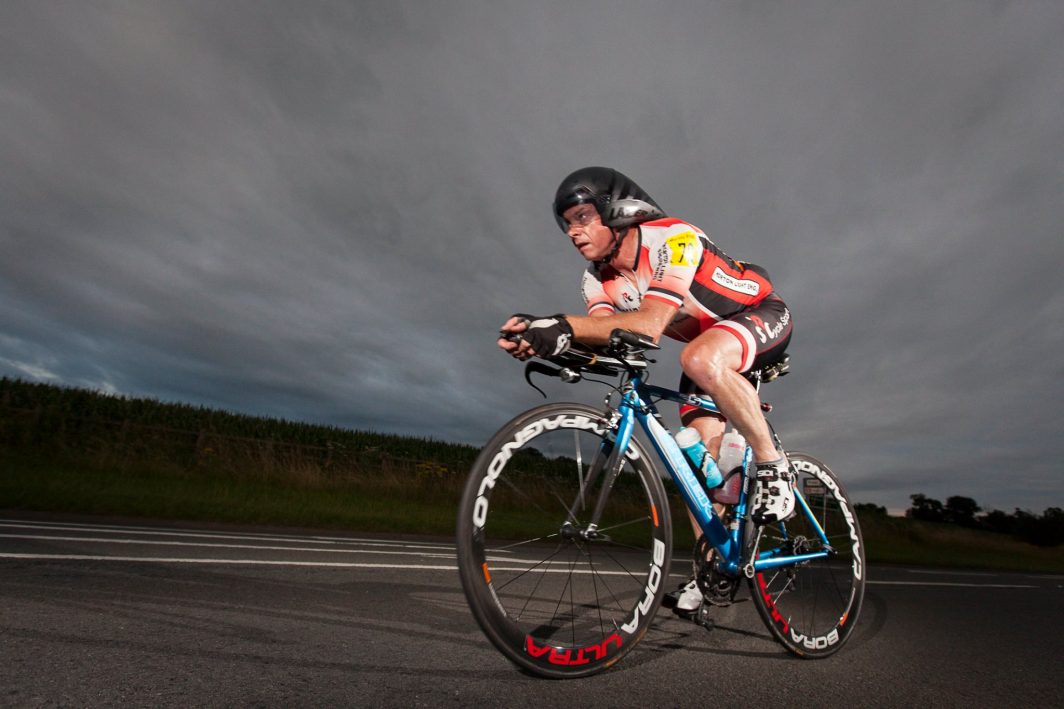 That was about 18 hours in around 8am and probably the lowest point I had been at. I came to a stop where my crew where stationed in agony with a muscle spasm in my back. Obviously my legs are also jiggered by this point but I was really starting to worry about the back pain.

One of the great things about this event is coming around each lap and seeing your crew – the lift you get from their support is incredible – these guys have given up their weekend to support and encourage me to keep going. This time was no exception, I got back on started to pedal and within ½ hour was flying again on my way to covering 477 miles and finishing an incredible 7th in the national championship 24 hr.

18 hours earlier just before facing the time keeper I bumped into Martin Wiggan from Seamons CC who was just about to embark on his first 24. I’m not sure who looked more nervous – Martin for not knowing what lay in store or me for knowing exactly what we were letting ourselves in for!

Saturday afternoon was very warm with little wind – perfect for fast rides by the strong men – the main contenders were off within 10 minutes after me so I was ready for taking up the lantern rouge on the road. I was off at 1419 – no 79. No 78 – RimasGrigenas took to the line with about 15 seconds to go in his first ever time trial – hell of an event to start his career off.

I faced the time keeper with Maria watching me off. My game plan was to settle into an early rhythm averaging 22 mph. I had even done a warm up so I was racing from the off and very soon my garmin was displaying 23 plus average. Too fast I thought but It wasn’t long before my 3 minute man – Victor Chetta from Mid Shropshire Wheelers went past me like he was riding a 10… he would also go past me on the finishing circuit the following day at exactly the same speed on his way to 3rd place with over 507 miles – a fantastic ride.

The first section was the transfer from Farndon to Broxton Roundabout and then south down the A41 to Prees.  This section was covered in about 44 minutes – didn’t really get a chance to settle in to the ride as the traffic was very busy and it was hot. After this we had a leg down to Espley via Tern Hill back to Prees and then to Battlefield and back – twice!! Double the fun. At the second turn at Battlefield we had covered 100 miles. I was lying 8th at this point having covered the distance in 4 hrs 28 minutes averaging 22.3mph all was going well.

We were then sent on to the Quinna Brook circuit for 6 laps by the end of which it was after 11pm and dark and I’d covered 190 miles. Average speed had dropped slightly to 21.5mph. At some point on this circuit I was riding alongside Gary Drew of the Royal Navy & Marines CA – a good 24hr man. Our pace was still in the high 22’s and we were both riding hard into the night – probably too hard hence why I stepped off the gas.

At between 7 and 8pm my wonderful crew passed me a musette bag full of pizza slices which went down a treat. They also packed some chips in tin foil (miss communication on my part) but I dropped all but 1 of them and by the time I came around for the next lap birds had eaten the lot. As the time ticks by it does become increasingly harder to eat. At first I was using gels and energy bars with energy drinks but after a while you get really sick of them, so good old fashioned pizza and the odd ham sandwich were welcome. Never got fed up of mars bars though!

The only mechanical to speak of in the whole event was that my spare rear light had bounced off somewhere around Quinna Brook.

By now my day support crew – Maria and my brother and sister Will and Vicky had been relieved by David Wright for the night time although Will stayed up into the early hours. It is so important to have a support team as Ive said earlier the lift you get from them is incredible.

Its now pitch black and we are on the Tern hill / Espley and back leg for hour upon hour – my favourite time. The traffic is nil and the sight of night time riders lit up like beacons mile after mile is to behold. My night time pace was dropping but still pretty good at 20 MPH. At 12hr mark I’d bagged 251 miles with an average 21.2mph. This is 31 miles more than I’d covered at the same event 2 years ago and other than coming in for lights and the odd nature stop I hadn’t had any time off the bike.

At around 3:00am we had a convoy of about 20 wagons pass us travelling south on the A41. A surreal experience. 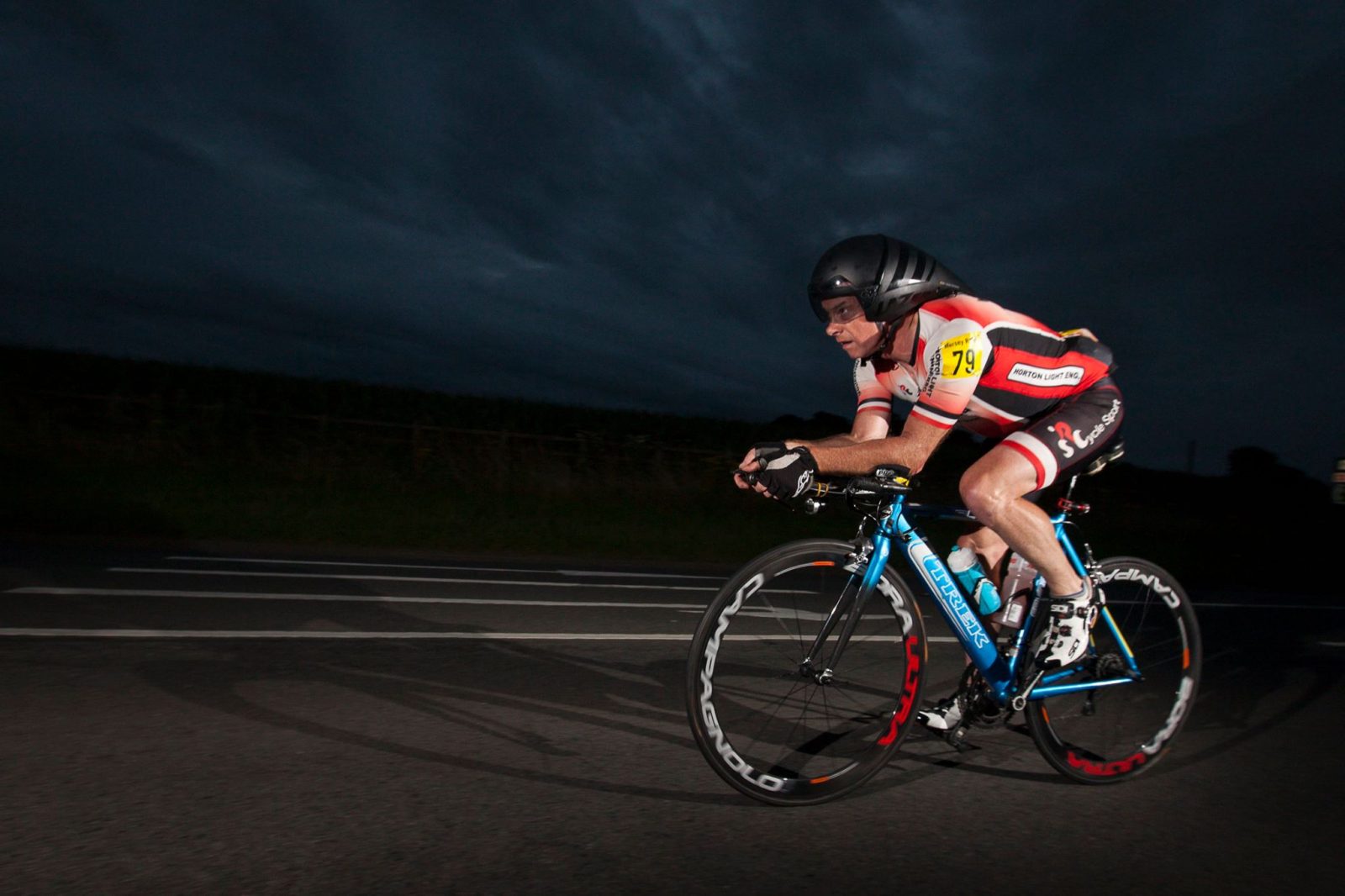 Some time after 5am I started to feel really drowsy and speed started to slow alarmingly. Same thing happened to me 2 years ago so I was expecting it. I think that because it becomes daylight you think you are going to fly again but of course you don’t and then you start getting dis heartened and head straight for a bad patch. Just got to feed and ride through it which is exactly what I did – came in and stopped for just over 5 minutes for some breakfast and a quick leg rub.

Replenished off I went again around the Quinna Brook circuit back up to speed. A couple of hours later was when my back started to spasm and I came in for the painkillers I already had in my pocket! This was David Wright’s last job to get me going again before he went off home for a well earned rest – having raced himself on the Saturday and stayed up all night supporting me. Top bloke!

He was relieved by Maria along with my daughter Tasha and our good friends Alan and Louise. Unfortunately their first sight of me on the Sunday was on the floor in agony!

By now I had covered 360 miles and still had 6 hours left on the clock. I was clinging on to hope that I would ride through the back pain and bar any mechanical I started to seriously think that not only a PB was possible but that the club record would be in reach – just. I put in 2 or 3 really strong laps of Quinna Brook and after an hour the back pain had eased considerably but I was feeling really tired again. Then I got directed to transfer to the finishing circuit which gives you an enormous lift. The transfer back to Broxton is really fast and it gets you racing again.

I arrived at the first time keeper on the finishing circuit at around 20 ½ hours in having covered about 414 miles. 3 ½ hours left on the clock and the first lap was covered in 42 minutes – an average of 20mph so well on course for the club record. Even though I’ve done 2 of these events I am still astonished that you can ride at or above a Sunday club run pace after riding for so long.

Toward the first lap I clicked over 426 miles so surpassing my PB from 2 years ago and felt awesome. The support around the finishing circuit was brilliant. I had Maria and Tasha at HQ with Alan and Louise stationed ½ way around the course with Will and Vicky in the support car. Margaret Millington and Liz Ellam were marshalling on the course so it was good to see them on the day.

The next couple of laps where about a minute slower and the hill at Barton was beginning to feel like an alpine climb. I think it may have been my 3rd time up it when some of the club riders went past me the other way – exactly like 2 years ago. Again it was great to see them.

At the end of the 3rd lap I shouted to Margaret and Liz that the club record was going to go on the next lap. 4 miles later and I’d got it. I was flying at this point and going through all sorts of emotions. But I was still racing and still had over an hour on the clock. The next lap was done in about 43 ½ minutes so still reasonably quick but I was slowing and finding it really hard to keep going. My legs were completely done. I was hoping to finish at the time keeper were Margaret and Liz where but I just didn’t have the speed to get there. One last time up Barton hill nearly ended it for me. On the descent I slumped over the bike knackered. Thanks to Louise and Alan screaming at me I managed to perk up enough to get me to the next time keeper.

“No 79 time’s up. STOP” Best thing you hear at the end of 24 hours riding. I just about managed to get off my bike with some help but that was it, couldn’t stand let alone walk! How can that be? You can still pedal a bike around and then fall in a heap when you try and walk!!

Anyway that was it. All over. 477.17 miles confirmed on what was by far the ride of my life.

Massive thanks to my crew – Maria, Tasha, Will & Vicky. Alan & Louise Nicholson and of course the mighty David Wright. All of these guys contributed massively to every mile. I may be the one turning the pedals but theres no way I could’ve done this without them.

All done on a second hand bike frame that cost £115 on Ebay!