After months of planning to a level of detail that would rival the actual Grand Départ, the time finally arrived for the WRC elite to assemble in Kettlewell, Yorkshire for 3 days of riding on the roads that would greet Bradley Wiggins Chris Froome in July.

Instead of the usual weekend ride out with a following car, it was an early start whilst everyone drove over to the Yorkshire Dales for a 10.00am prompt meet. The group was met with clear blue skies, light winds and warm temperatures, which according to Dave Wright of the official ‘Welcome to Yorkshire’ committee, was how it always was in this neck of the woods.

As usual the first priority was to find a room to dump the bags and find a bedroom, being careful to avoid any ‘snorers’, then put the bikes together and finally locate the nearest place that sold tea, coffee, sausage/bacon butties and cake. 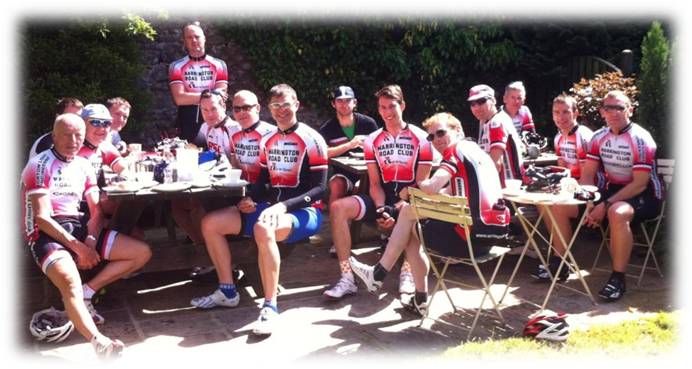 The group quickly assembled at Zarina’s café in the sunshine, generating scenes similar(ish) to the Tour’s Village Depart, minus the athletic riders and attractive ladies.

Several pots of (Yorkshire) tea later, the group decided that it was time to actually do some cycling so following a team photo in front of the pub, taken by a friendly local, there was a short neutralised section out of Kettlewell and straight onto the tour route for Stage 1.

Almost a mile into the ride and a quick stop was needed for some last minute front mech adjustment which turned out to be a smart move bearing in mind that there was going to be serious granny gear usage throughout the day. 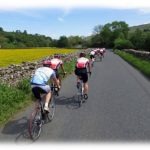 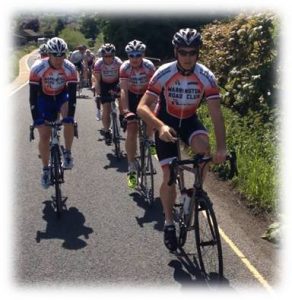 The first ever WRC selfies on the roll out.

The first climb of the day at Kidstones went without incident as the climbers were still keeping their powder dry for the big climbs later in the day. A rapid descent and then a potter through to Hawes then brought a sharp right turn and it was every man for himself.

In what was to be the script for the rest of the weekend, Young Jack then proceeded to ride away from everyone towards the summit of Buttertubs whilst everyone else grabbed their shifters and stuck it in the granny gears.

A speedy descent to the bottom with a few stops for a photo, and then on to the Côte de Grinton Moor, again Jack flew the next followed by Rory into a brisk headwind. The smarter (i.e slower) riders huddled together in an elite chasing group and then swooped into Leyburn for lunch in the town square.

Post lunch it was 10 or so miles following the Tour route before we had to turn off to make the trip back. Out of Pateley Bridge was the biggest and toughest climb of the day, by this point it was merely a question of WHEN Jack would dance away into the sunset, and so it proved.

This time there was no re-grouping and the last 15 miles or so was a case of riding to the finish with whoever was near you.

Some didn’t quite have the energy to make it past the pub on the way back into Kettlewell.

Important statistics for the day were 16 riders, 90 miles, 3 big climbs, 1 medium climb, 2 cafés, In true Tour de France tradition, the night was spent preparing for the next day with a couple of fresh pints, although in our case it was bitter and lager.

Grey skies greeted the pélèton for the second day which was short of the odd rider. Even so, with the threat of rain, the group ventured out and in what was the luckiest mechanical of the day, Simon lost a seat pin bolt and had to turn back in the first hour. He was accompanied back by Mike which was a purely selfless act. Either that or he’d seen the climb looming and the rain blowing in.

Within minutes and on the only climb of the day, the rain started and wind blew and capes were donned for the rest of the ride. Christian Prudhomme was right, you can get “all four seasons in a day” in Yorkshire !

Dropping down off the climb and back through Settle and Gargrave and we were back for lunch with about 50 miles on the clock. This left the afternoon to chillax, read a book, and try to dry out the kit for the final stage on the Sunday. The sun did come out in time for tea which made the walk to the pub a little more pleasurable. 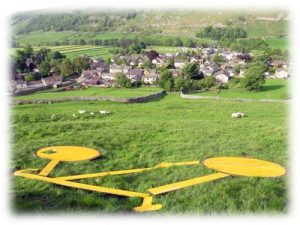 Some even managed to walk to the top of the nearest hill just to see the big yellow bike, take a photo, and get a phone signal to call back to civilisation. 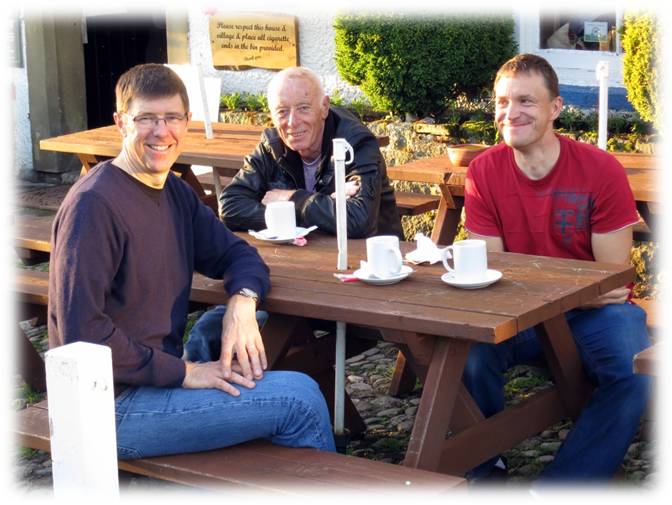 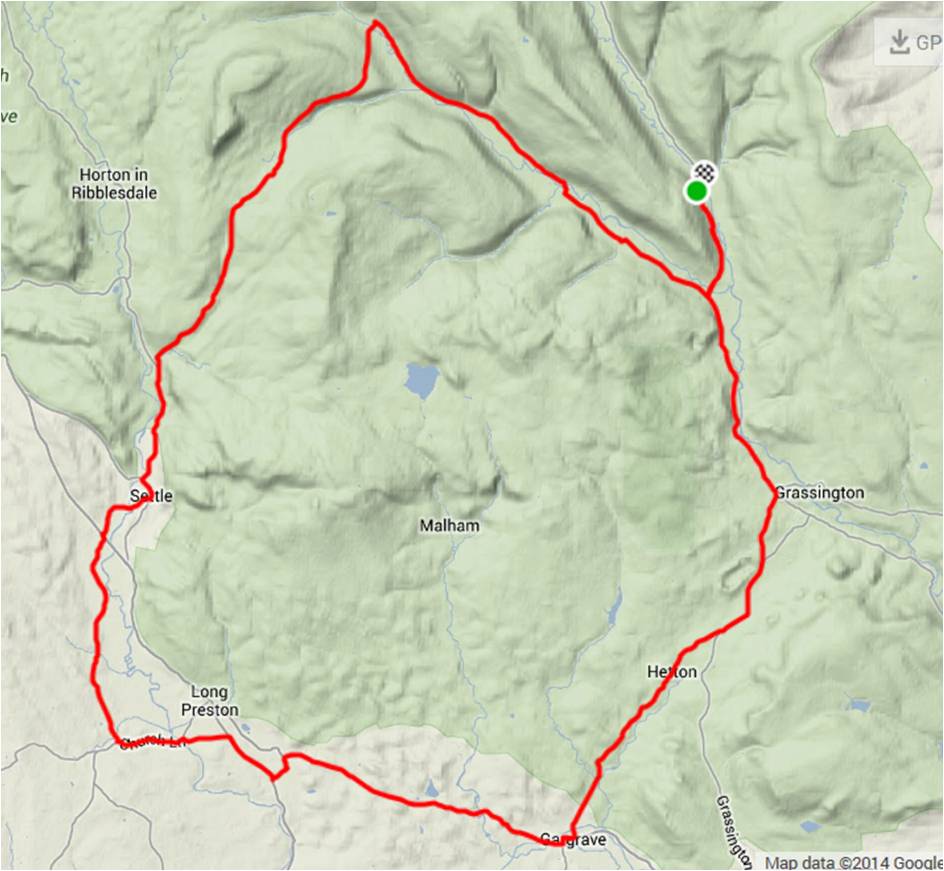 The sun was out again and with some sore legs in the group, this was surely the last chance for the GC riders to make their move and put some serious time into Jack as his youthful inexperience was obviously about to catch up with him. Unfortunately it didn’t !

Up the cobbled street and you could imagine yourself on the Koppenberg chasing Boonen and Cancellara. 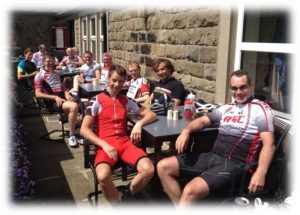 Lunch was at the top of another steep climb and was enjoyed al fresco, right up until the point when it got a bit chilly being sat out in the wind.

Several large lunches, cakes and coffees later and it was a magical mystery tour back to Kettlewell via some awesome lanes and scenery, even touching Lancashire was one point, heaven forbid.

Wait a minute, who’s that at the front ?……must have known there was a prime or a camera.

Dave and Simon wound up the pace on the run in to Kettlewell like Marcel Kittel’s lead out train in full flow, people moved into position on their chosen wheel, whilst Trevor managed to avoid the wind. This was vintage stuff.

Gordon blinked first and set off in search of yellow with a few miles remaining but all this served to do was aggravate ‘Young Jack’ (did we mention that most of us are old enough to be his dad/granddad ?) into chasing, and then passing, and then leaving everyone behind. In an act of pure arrogance, he opened up a gap in the last mile that was big enough for him to dismount and take a photo of everyone as they entered Kettlewell so we could record who came 2nd to 14th !

The only way this could end was with the obligatory cup of tea served by Dave ‘Yorkshire’ Wright.

The weekend was so slickly organised that apparently Gary Verity used it as a template for some ‘fish & chipper’he ran a month later called the TDF, which was almost as successful. 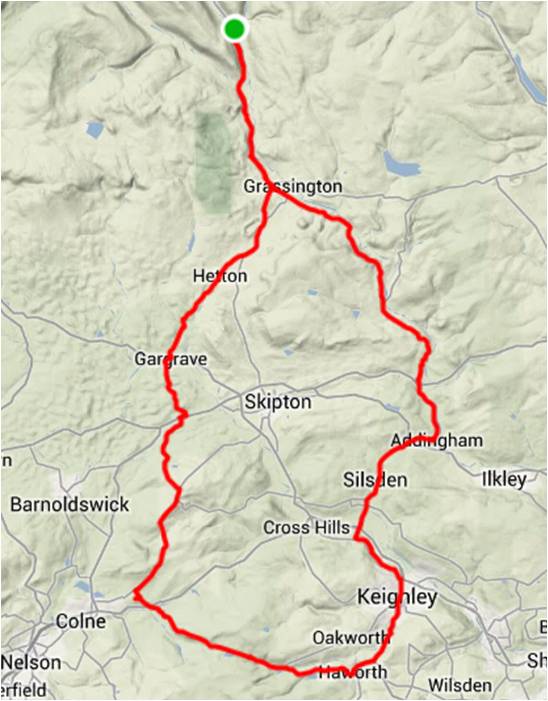 Thanks to Steve Hankey for the write up !