Winter Training and Trips plus Majorca well behind us we’ve hit the mid point of the season now and I’ve collected some photos of the lads racing this year from various sources, the main contributor is Ellen Isherwood, plus Adrian Jaap (WVCC), Martin Holden and Peter Lloyd. (Apologies if i have missed anyone). 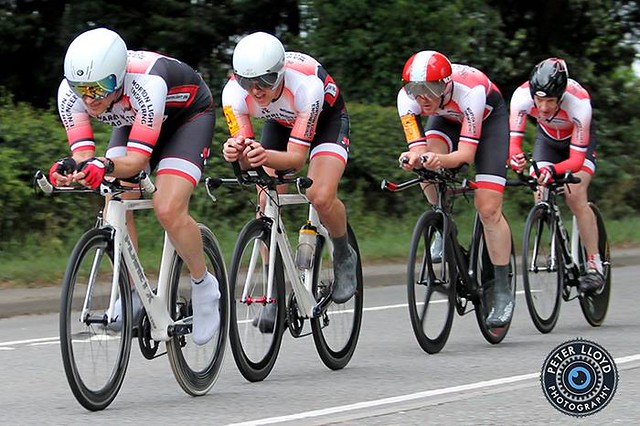 Starting with the Road Race, Paul Gibson has had several top 6 finishes so far this season who’d be favourite for the Club Meadowcroft Trophy as it stands so far collecting a number of points, most recently with a 4th place in the Seamons Road Race this week.  Plus Paul McGowan in a sprint finish and David Fox with a solo break away also chipping in with top 6 finishes, its been a decent start on the road.
The Fastest Time Trials ‘reported’ and/or found are as below with some good PB’s noted from Steve Hilton in a 50, myself over 10 and 25.  Dave Friend and Jamie Eves also doing PB’s over the 10 mile distance, plus a return to racing from Nick Howl as well who has jumped in to a couple of 10’s this last month…    All the times are either from yourselves, the CTT site or Club Web Sites that run local evening 10’s.
Note that the Bronze medal time for the 10 Distance for gents is 23:03, something to aim for if you don’t have one already if you are competing in 10’s as well as other racing/time trials.  See Club Rules for Times regarding Medals Claims and Times.  You can claim medals at the end of the year which are presented at the End of Year Dinner.
A further note and much Kudos to our Club President  Glen Longland who travelled to the other side of the World to Compete in the World Champs in New Zealand to finish 6th in the Time Trial, 10th in the Crit and 17th in the Road Race.
We’ve now completed 3 of our 5 Open Events, the Harry Barker 50, Dave Davenport Road Race and 4up TTT all being really successful events ran by David Wright, Paul McGowan and Trevor Horton respectively.  Out next event is July 15th for the Ron Spencer 25 Mile TT on J/2-9 being ran by Alan Ottiwell.
Share this…